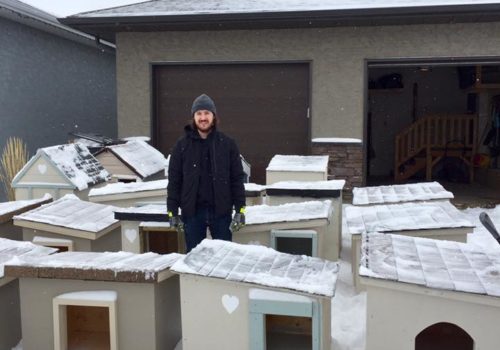 Devon LeBlanc & I took 18 insulated dog houses from Brandon to Peguis First Nation. We met Josh Muyal there who brought 5 more dog houses made by Shadows Mission. Dropped off the 23 dog houses to some dogs in need along with straw for bedding, heated water dishes, pallets for the houses to sit on, and a letter to each owner. It was a project that was happy & sad. There are many good owners out there we saw who care & love their dogs. There were people we met who committed to spaying & neutering their pets. There was also 5 abandoned dogs and 1 cat. The Rottweiler dog was adopted by some friends & cat it had bonded with were going to the humane society, these two had been living on their own for over a year in a shed that was about to collapse. The provincial vet said they wouldn’t help and to call rescue groups and 99% of rescue groups are always full in Manitoba because of instances like this. The 4 other dogs that were a pit bull mix still need homes they had also been abandoned and were shivering at their former owners house. Owners had been reported for animal neglect but still nothing apparently came of it and animals were still without help. For now the pit bulls are with a local animal lover Rhonda Sutherland but says she is overwhelmed with these cases all the time. From being in the FB group “Manitoba Pet Fosters” I can confidently say that when people are buying dogs from breeders over adopting from reputable rescues that’s one less dog that could have got out of a situation like this. As many times on the group page posters are trying to get dogs out of these similar situations a common theme is “sorry we are full with a waiting list”. These reputable groups are lots of times really in need of funds & full so please consider helping financially & adopting if possible. There are of course other issues besides breeders vs adoption, including animal neglect & abuse, not spaying & neutering, band by-laws, need for tougher legislation from our MLA’s, lack of resources on reserves, etc. We dropped 2 of the bigger dog houses in an area known for strays to hang around. It saddens me to think of all the other dogs that are out there now in the cold not being cared for. For for the Peguis insulated dog house project I had so much help, the support from Brandon and area was incredible! Thanks to all the people who donated for material costs, donated their time to help build houses (Bill Horn 5, Shadows Mission 5, McCarty Construction 3, Bart Curtis 1, Ray Muirhead 1, Brett Konkin, Tracy Adams, & Justin Watters each helping me with 1), Justin Pearreax who donated a unused dog house, people who helped me move dog houses, St Louis Blues draft pick & Wheat King Captain Tanner Kaspick the for helping me paint them, Jordan Ludwig of Brandon Business Interiors for donating his enclosed trailer, and those who donated loose materials. There was so much help, hopefully I didn’t miss anyone. I plan to build some more houses soon for Strays That Can’t Pay & do another trip near the end of January. Thanks for all the support! Spay, neuter, vaccinate, educate, adopt! 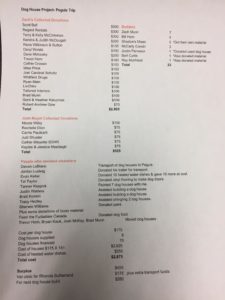